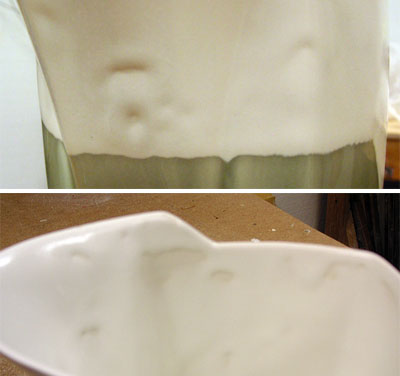 This cone 6 white glaze is crawling on the inside and outside of a thin-walled cast piece. This happened because the thick glaze application took a long time to dry, this extended period, coupled with the ability of the thicker glaze layer to assert its shrinkage, compromised the fragile bond between dried glaze and fairly smooth body. To solve this problem the ware could be heated before glazing, the glaze applied thinner, or glazing the inside and outside could be done as separate operations with a drying period between.